I just know it. Twenty years from now, my teenager will be laughing at these photos the way I laughed at photos of my young mama and papa and their habulan and taguan sa mga puno ng Camp John Hay pictures. I know i will reap what I’ve sown. Hahaha!

BJ and I were considering foregoing this new found tradition. Primarily because we were both very busy and didn’t have time to sit through production and logistical meetings. And also because BJ claims he wouldn’t know what to do in front of a camera!

"We've got Jason Magbanua and Pat Dy on board. Jason and Pat.

You don't understand. They can shoot us in our pangbahay

and we will still look cool."

Haha! So with barely a concept, two of our closest friends acting as an entire creative production team, two geniuses in the industry plus their respective teams, and only the clothes in our own closets, we set out for what would later turn out to be one of the most beautiful and fuss-free shoots I’d ever done.

While I've never been good at taking selfies, and I prefer candid shots to staged ones, I've actually been working in front of a camera since age 7. I would shoot print ads for random products, or be a "talent" or an "extra" in TV commercials before that one soda commercial launched my career. So you can say I was pretty used to being in front of the camera. I had a couple of preset smiles in my bag (open mouthed smile, half laugh, smile without teeth, smile with just eyes, etc.). Ha ha!

I'm also used to working with artistas who just knew how to switch it on in front of a camera. Or theatre people. Just like that. *snap* ON.

It didn't even occur to me that it wasn't going to be like that with BJ. That Pat was going to have to ask BJ to stand up straight, and then not too straight, or relax his shoulders, or put his hands in his pocket. I didn't think that he would need to be told to relax his jaws, open his eyes more for a shot and shift his weight this way and that! I can't even count how many times Pat and Jason used the word "relax". Hahaha!

But you know what? I LOVED IT.

I loved that he was "nako-conscious" in front of the camera, and his palms started getting clammy, and his smile would start shaking. I loved that he was so nervous, he kept on asking me if he was doing it right. I thought it was the most adorable thing. :)

You see, I've seen this man behind a desk, in a suit, in board meetings, talking to clients, or his employees. I've seen him behind a pulpit, preaching, leading a congregation into prayer, or facilitating Bible study. His every move shines with quiet confidence in HIS world.

This shoot reminded that me that we were from two different worlds. He didn't ask to look at the camera right after to see if he looked good in any of his shots. He didn't have people following him around making sure every bead of sweat was tissued off and retouched. He didn't have an ON button to switch to a different persona. He was just a guy indulging his persistent (and occasionally bratty) fiancée, just to make her happy.

BJ and I get along because of all the things we have in common, but I love that we're still able to celebrate our differences. There are so many things I've learned from him because he's in the corporate setting. And he claims to have learned a lot from me too. ("Look down, then slowly look up, eyes towards the camera, and smize.").

At the end of the shoot, someone says the magical words-- "it's a wrap"-- people clap, and my sweet BJ lets out a sigh of relief. :) I went home with a new and greater appreciation for the man I'm about to marry.

Here are some of our pre-wedding photos shot by the great Pat Dy, Caliber King and Francis Perez, followed by Jason's beautiful video (Pablo Neruda, my heart...).

Can't wait to share the gorgeous wedding photos in my next posts! 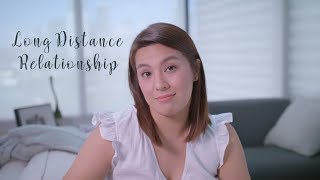